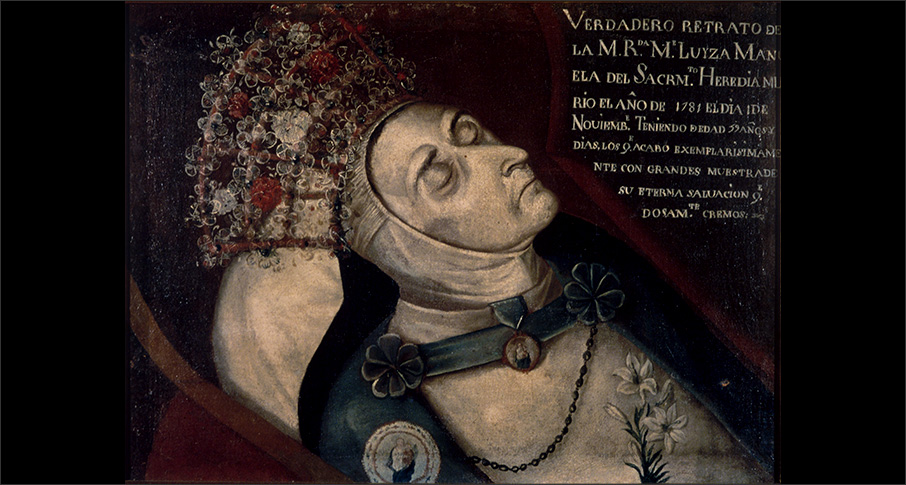 This bust-length painted portrait depicts Luisa Manuela del Sacramento, a nun of the Conceptionist order, after her death at the age of 59 in the convent of Inmaculada Concepción in Santa Fé de Bogotá. Nuns, as well as other elites, were often commemorated on their funeral biers in 18th- and 19th-century Spanish America as well as in the rest of the Catholic world. And across Spanish America, nuns often had their portraits painted just twice—at the time of profession, and at the time of death.

In New Granada, indeed, in most parts of the world before the 20th century, death was an everyday companion. Portraits of the dead reminded the living of lost friends and family members, as well as their own journey towards the same point. But they also reaffirmed a belief in eternal life, signified by the flowered crown that the nun wears. As a “Bride of Christ,” Sister Luisa was believed to be finally joined with her bridegroom.

This painting dates from the very end of the colonial period. Although Sister Luisa died in 1781, this image is one of several 19th-century portraits of deceased nuns attributed to the Bogotá painter Victorino García Romero. Soon after García painted these works (some of which, including this one, were probably copies of earlier paintings), the tumult of Independence descended upon the city of Bogotá. Creole elites assumed power, and years of violence followed, as Spanish forces fought to regain the capital of New Granada. Despite this, life in cloistered convents retained many of its rhythms, including the practice of commemorating the dead through portraiture.