Virgin of the Mountain of Potosí 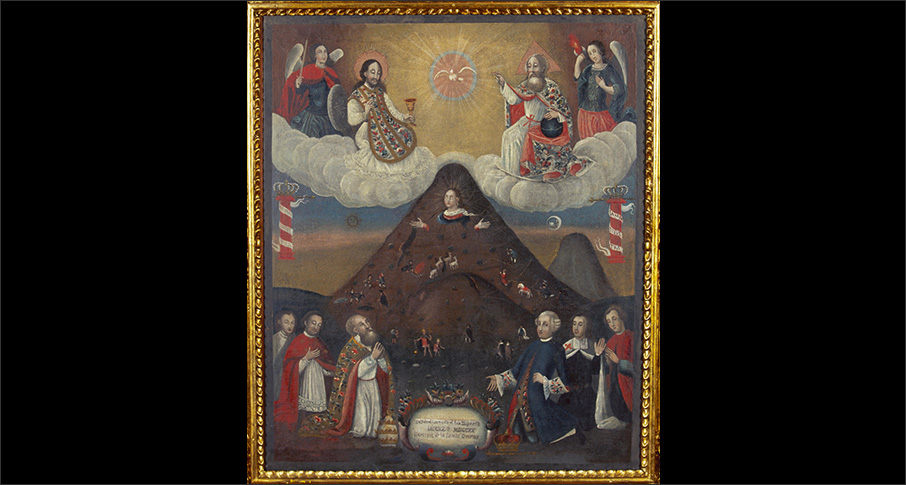 In this devotional image, known today as the Virgin of the Mountain, the body of the Virgin Mary merges with the great silver-producing mountain of Potosí in Bolivia. Paintings like this one appealed to viewers in Potosí by showing the familiar landscape—the mountain that dominates the town—through a scrim of divine intercession. In short, paintings made the otherworldly manifest in the local world.

Many versions of the Virgin of the Mountain were painted in the 18th century, and they are often distinguished, as is this one, by the inclusion of the painting’s patrons, pictured at the bottom. These elites may have been giving thanks for the riches they accrued from the mines, for it was widely believed by Spaniards and Creoles that the mineral wealth God had bestowed on the New World was a sign of his support of their colony.

The Virgin was a familiar subject in paintings from this period; as a divine mother, she was the intercessor between people, seen below, and the Holy Trinity, above. Some scholars see this particular cult image as an example of religious syncretism—the idea that native religion and Catholicism were conflated to create a new set of beliefs during the colonial period— because a female deity named Pachamama, identified with mountains, was worshipped in the Andes before the conquest. But Virgins and mountains also have a long history in Spain (for instance, the Virgin of Montserrat). Images such as this Virgin were therefore indebted to trans-Atlantic patterns of Catholic religious devotion, yet their painting style and local meanings made them profoundly Andean works of religious expression.

Gloria in Excelsis: The Virgin and Angels in Viceregal Painting of Peru and Bolivia. 1986. New York: Center for Inter American Relations.