Devil in the New World 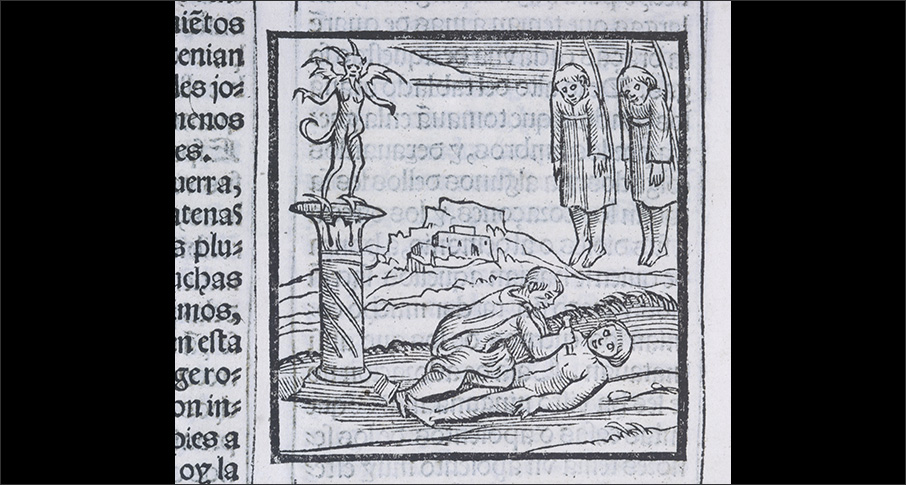 This woodcut image was set into the text one of the chapters of Chronicle of Peru (the Crónica del Perú in Spanish), an influential 16th century book by Pedro de Cieza de León. It offers a glimpse of the way that Europeans, soon after the conquest, explained Andean ritual. After the Spanish reported widescale human sacrifices among the Aztecs in the early 1520s, Europeans were repulsed and intrigued by this pagan (i.e. non-Christian) ritual. Some years later, Cieza, like many Christian authors of the time, would attribute the practice of ritual sacrifice and cannibalism to the work of the devil.

The image here was created not by Cieza but by a European artist, employed to illustrate his text. The artist imagines the scene of sacrifice overseen by a statue of the devil; this idol is set on a Corinthian column, and depicted in conventional European fashion, with bat-like wings, clawed hands and feet, a long tail, and horns growing from his head. The artist imagines the Andean “butcher” (likely an indigenous priest) as his agent, hanging up his sacrificial victims like sides of beef.

Such images fueled stereotypes about the New World and its peoples, casting indigenous priests in the role of the devil’s henchmen, and flattening distinctions in religious practice from region to region. (For example, Andean sacrifice seems to have been much more limited than Aztec.) But they also represent genuine attempts among Europeans to understand foreign belief systems in terms of their own beliefs. How else could such a practice, along with the highly developed ritual systems and deep-rooted beliefs among peoples in the New World, be explained? In the case of Cieza de León, respect for the Incas not only horror at their devil-inspired ways, surfaced in his Chronicle. Today, historians still seek compelling explanations for pre-Hispanic beliefs about the Otherworld. For contemporary scholars of religion, however, anxieties about demonic intervention have given way to questions about human spirituality and the specific colonial practices that rendered Andean beliefs so frightening (yet also fascinating) to European readers of the 16th and 17th centuries.