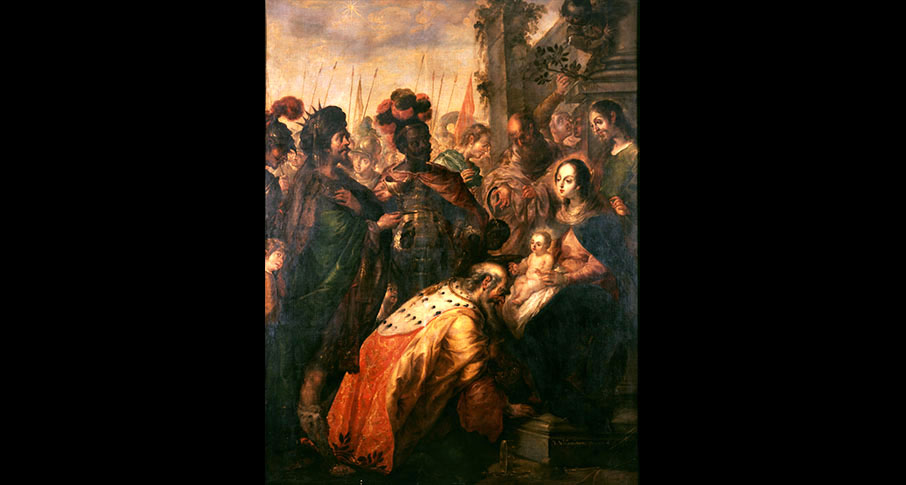 Cristóbal de Villalpando (ca. 1649-1714) was one of the leading painters in New Spain at the end of the 17th century, measured by the number and prestige of the commissions he was awarded. He painted this large biblical scene at the peak of his career.

The painting shows a scene mentioned in the gospel of Matthew when kings, or magi, visit the infant Jesus. In medieval depictions, the three kings often personified the three parts of the known world—Europe, Asia and Africa. Thus Balthazar, one of the kings seen in the center of the painting, is traditionally portrayed as black.

Like other painters of the day, Villalpando turned to engravings of European paintings as inspiration for his work. This particular painting was indebted to Peter Paul Rubens’ works of the same title, which were engraved in the first half of the 17th century. Villalpando’s distinctive stylistic trademarks are clearly visible, like the tapering fingers of his subjects, which almost end in a point.

Seventeenth- and eighteenth-century viewers would have been quite familiar with the scene, not only through its numerous representations in narrative paintings, but also through performances of religious plays, where the visit of the Magi would be reenacted. On the Epiphany, the Church holiday marking the event that falls after Christmas, priests would also deliver sermons about the kings’ visit to the infant Jesus. Paintings like this one not only reinforced in viewers’ minds the great narratives of the Church, they also gave viewers an opportunity to imagine themselves as witnesses to divine events, akin to the multi-ethnic group that Villalpando crowds into the left side of the painting. One of the figures may be a self-portrait of the artist.

While the original location of this painting is unknown, the large painting seems to have been brought to the United States by members of the Jesuit order who traveled to Mexico in the late 19th century on a “begging tour.” At that time, the baroque style of this painting was out of fashion in Mexico, and it may have been a kind of cast-off given to the US Jesuits. They installed it in their university in the Bronx, in whose collection it remains today.