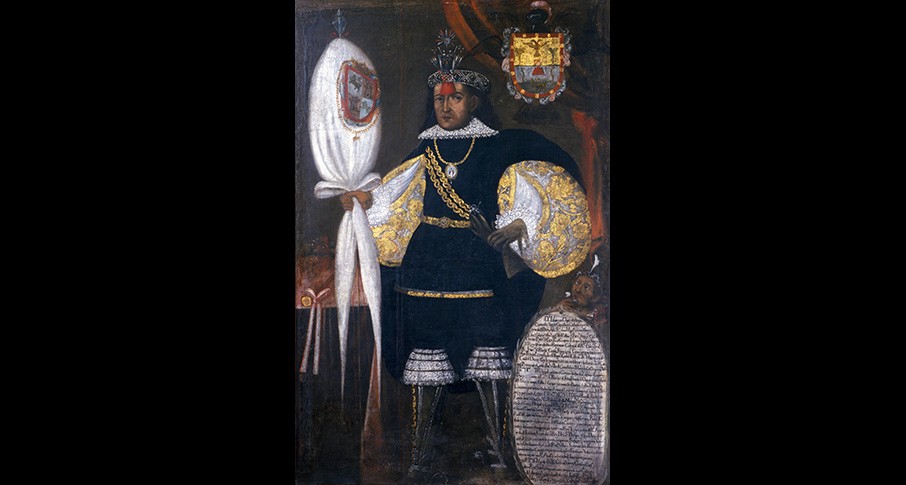 Don Marcos Chiquathopa, a powerful Andean, appears elegantly and richly dressed in a black cloth outfit adorned with gold chains and embroidered lace. Across his forehead hangs the mascapaycha. His pose, along with the painted setting, is drawn from European portrait conventions.

While this oil painting combines European portrait traditions with pre-Hispanic Andean iconography, the meaning of the mascapaycha, although rooted in pre-Columbian ceremony, had changed dramatically in the colonial period. Before the conquest, the mascapaycha was the exclusive signifier of the Sapa Inka. By the 18th century, it had been resurrected by a larger circle of wealthy and powerful indigenous leaders who wore it on special occasions. In this context, it buttressed their authority via a connection (sometimes putative) to the former Inka rulers. Thus the headdress depicted here harkens back to the pre-Hispanic past and symbolically secures don Marcos’ ties to that history. This connection to a distinct pre-Hispanic history set don Marcos and others of his class apart from the Spanish and Creole elites also living in Cuzco, even as the tradition of portrait painting connected them.

This image also suggests much about the cultural complexity of colonial Andean life. The cartouche in the painting, a common feature in colonial portraits, identifies don Marcos as an indigenous leader of exemplary heritage and great virtue. Court records of the time, however, indicate that he was also a harsh man, with a reputation for brutally mistreating his own Andean servants. As a curaca, he would have been responsible for mediating between his indigenous charges and colonial authorities, but clearly he also sought to serve his own needs and interests as well. This painting, which emulates portraits of prestigious men known in Cuzco at the time, was one visual strategy don Marcos used to buttress his claims to authority and privilege.

Cummins, Thomas B.F. 1991. “We Are the Other” Peruvian Portraits of Colonial Kurakakuna.” In Transatlantic Encounters: Europeans and Andeans in the Sixteenth Century. Kenneth Andrien and Rolena Adorno, eds., pp. 203-231. Berkeley and Los Angeles: University of California Press.