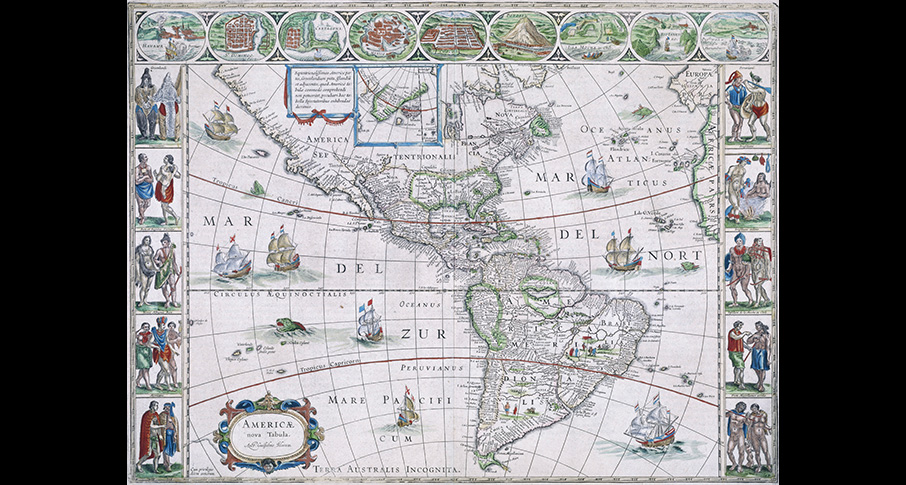 This map of the American continent, created in Amsterdam by a famous mapmaker, was made to satisfy the demand of a European public hungry for images and information about the Americas. Its maker, Willem Janszoon Blaeu, drew upon existing maps and reports as well as best-selling illustrated histories of his time to create the central map and the city maps that adorn its upper border. The popularity of his map is registered in the number of editions: the large engraved plate from which the map was printed was reworked five times between 1617 and 1645.

Along the left and right side of the map, indigenous inhabitants of the Americas are set into frames. Each is presented as an Edenic couple, most wear scanty clothing and hold “characteristic” implements—a stereotype of the noble savage. Ironically, at the historical moment that the map was created, many indigenous inhabitants of the Americas lived cities such as Mexico, Cuzco or Potosí (all of which appear along the top of the map) or in towns organized along Renaissance models. And by the early 17th century, in addition to their own languages, some indigenous people spoke Spanish or Portuguese. But images like the Blaeu map served to perpetuate a myth of America’s Indians, living frozen in a past era, a myth that survives even today.

Keuning, J. 1973. Willem Jansz. Blaeu: A biography and history of his work as a cartographer and publisher. Rev. and ed. by Marijke Donkersloot-De Vrij. Amsterdam: Theatrum Orbis Terrarum.