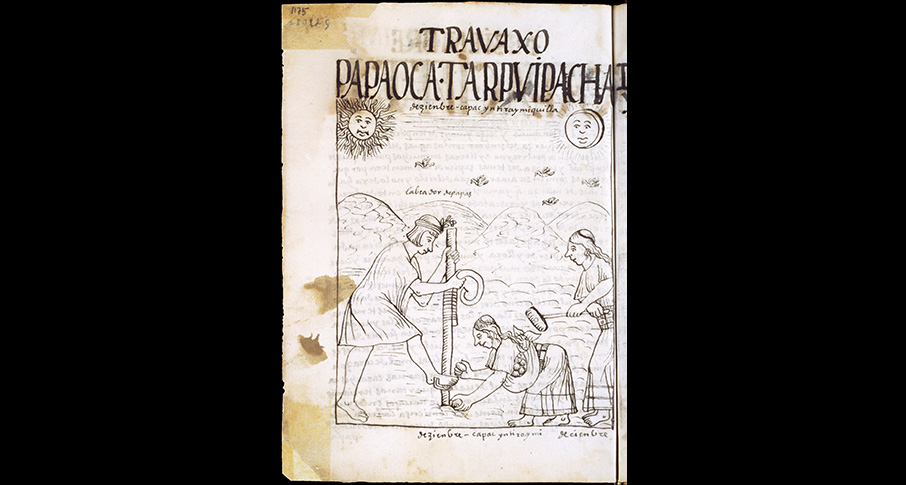 As shown by Guaman Poma, planting requires both men and women. At the center of the scene a woman bends to place a potato—the main food crop in the Andes—in the ground, at our left, a man prepares the soil with a digging stick. The clothing, tools and technology relate to pre-Hispanic practices, many of which continued into the colonial period. The inscription at the top of the page, a combination of Spanish and Quechua, links the season of planting to the month of December and the festival of Inti Raymi which honored a primary Inka deity, the sun.

This scene is not only agricultural in theme, but it is also religious and calendrical. In addition, it cuts across cultural traditions. For instance, in the pre-Hispanic Andes, the sun and moon were associated with male and female principles—as they are here, with the sun hovering above the man, the moon above the women; yet Guaman Poma has modeled his celestial bodies on European depictions. The written text further anchors the image within a colonial context since alphabetic writing was not known in the Andes before the arrival of Europeans and Christianity. Nevertheless, Guaman Poma’s decisions to write in both Quechua and Spanish and to fashion images using indigenous and European conventions produced a mixed result. His work is unique—and highly valued by scholars today, yet few in the 17th century could read all of the languages or decipher the visual codes necessary to understand the subtleties of his message.