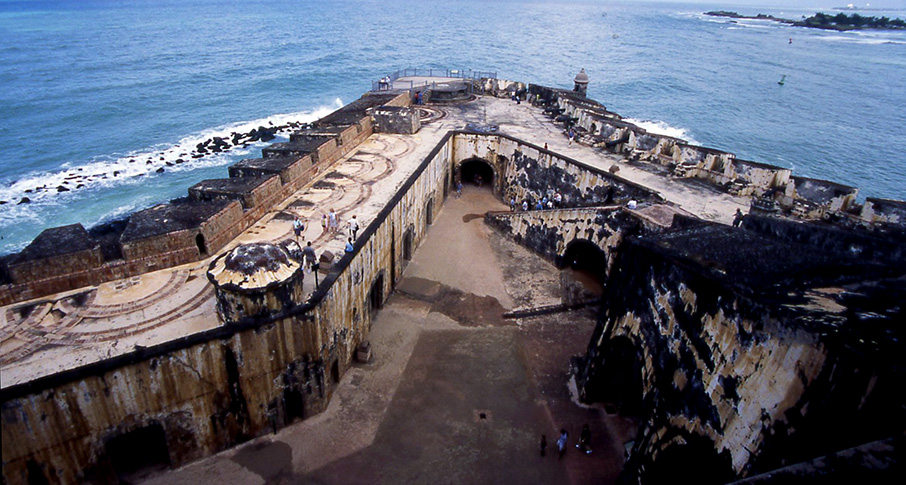 El Morro, whose full name is Castillo de San Felipe del Morro, was one of the early military garrisons built in the Caribbean to shield Spanish American cities and their ports from attack by foreigners (especially the British and Dutch). The thick walls, which jut into the sea, were built for strength and protection.

The forms, functions and aesthetics of fort architecture—from Havana to Santo Domingo, and from San Juan to Saint Augustine—were established largely by military engineers. El Morro’s imposing scale and structure, which would have been familiar to people who saw other seaports of Spanish America, offer direct physical testimony to the early shifts in power, as indigenous people of the Caribbean became subject to the Spanish Crown. Indeed, pre-Hispanic ideals and requirements for protection from attack by outsiders took markedly different forms.

King Charles V of Spain (r. 1516-1556) commissioned the first structures of El Morro in 1539. The engineers Juan de Tejada and Juan Bautista Antonelli laid out the main design which, over time, changed and grew under the guidance of colonial officials. For instance, significant rebuilding campaigns and enlargements took place between 1760-1780, as Spain sought to protect its increasingly vulnerable Caribbean ports. The fort served as such through the colonial period and into the 19th century, when the U. S. took over Puerto Rico. It still functioned as a military site in World War II, but today El Morro is a national monument and World Heritage site open to tourists.