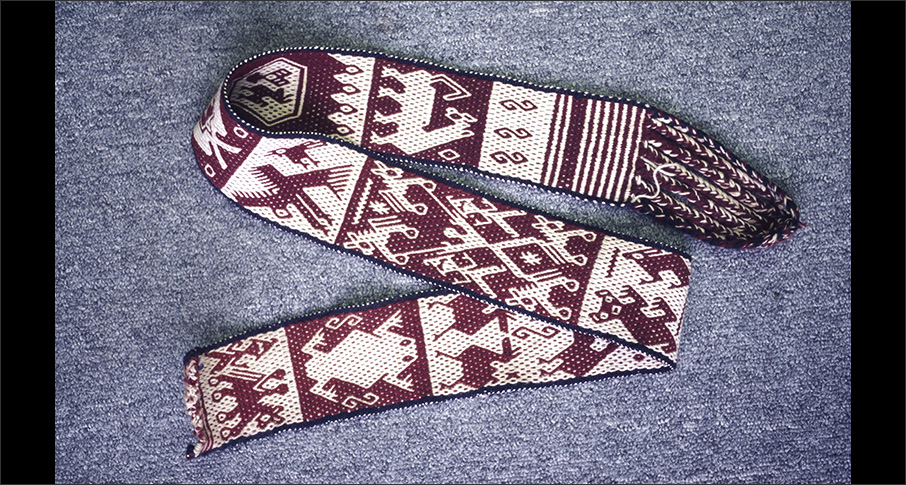 This woven belt represents an 18th-century political execution.It shows the punishment for treason in both Europe and the New World: convicts were pulled limb from limb by horses. In the woven design, the central human figure, with arms and legs spread to make a large X, is tied to four horses, who occupy the corner of the design. Woven in Chinchero, Peru by Gregoria Pumayalli Awkakusi in 2002, the design refers to the revolt and execution of Tupac Amaru II.

In 1780, José Gabriel Condorcanque, a cacique from the Cuzco region, pushed to the limit by a corrupt and abusive local Spanish official, took him prisoner and executed him. In this act of rebellion, he took the name of the last Inka ruler, Tupac Amaru. He was able to rally elites and peasants who were enflamed by Spanish corruption and the crippling tax burden that stemmed from the Bourbon Reforms, and many joined his homespun army. But Spanish and Creole forces pulled together as he attempted to take Cuzco, and Tupac Amaru was captured in April of 1781 and executed in Cuzco’s main plaza.

After Tupac Amaru’s revolt, Viceregal authorities cracked down on expressions of Andean history. Nostalgic portraits of the Inka, a once popular genre, were banned. But forms of visual expression were multifold, and weaving could carry the historical memories forbidden in other media. Embedded in garments, and carried by a strong oral tradition, the story of Tupac Amaru’s resistance and punishment was passed down from generation to generation.