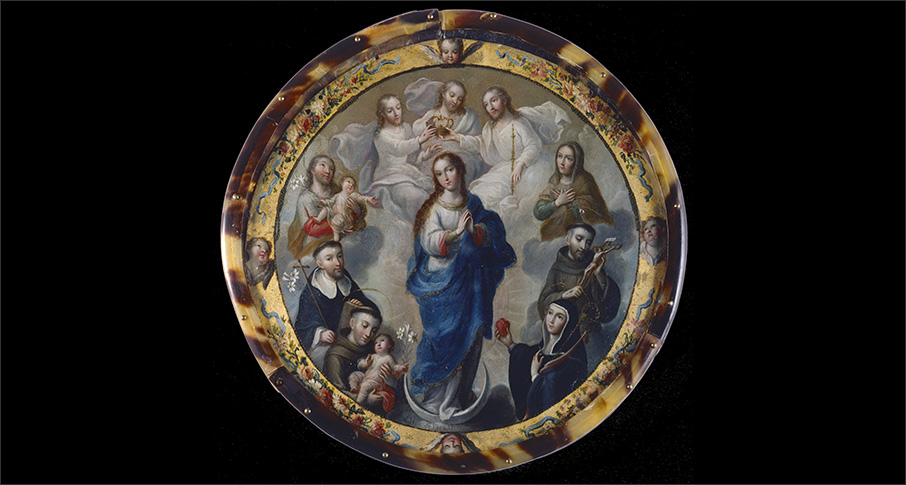 Several orders of nuns in New Spain, including the Conceptionists and Jeronymites, wore “shields” (escudos in Spanish) or insignia, fastening these circular ornaments to the front of their otherwise sober habits. In the 18th century, escudos ranged from elaborate paintings carried out by the leading painters of the day, like this one, to needlework designs made by the nuns themselves. Conceptionist escudos typically featured Mary of the Immaculate Conception at center, as does this one, surrounded by the Holy Trinity, angels and saints. Some of the saints were ones important to the order, like Saint Francis at the lower right, and Saint Gertrude the Great who offers her heart to God, may have been the choice of the nun herself.

Escudos were most likely worn only on special occasions: when a nun entered a convent or died, or on the very rare occasions when nuns—heavily veiled— joined special processions outside the convent. Although the appearance of nuns in public spaces was rare, their power in the public sphere in Spanish America is coming to be better understood. Convents often had substantial assets brought by the nuns themselves, and they often served as lenders in a society that prohibited usury. The luxury of this escudo, with its fine painting and elegant tortoiseshell frame, gives an inkling of the wealth of some nuns’ families. Moreover, an abbess at a wealthy convent could assist her male relatives in obtaining leases (censos) of the convent’s capital. And within the walls of the convent, nuns wielded considerable political power. Nuns who were elected abbesses controlled the lives of convent-dwellers, which could number in the hundreds. And although convents, by the 17th century, were under the control of their complementary male orders, the nuns could, and did, resist incursions into their way of life by outside reformers.