The Attack on Santo Domingo 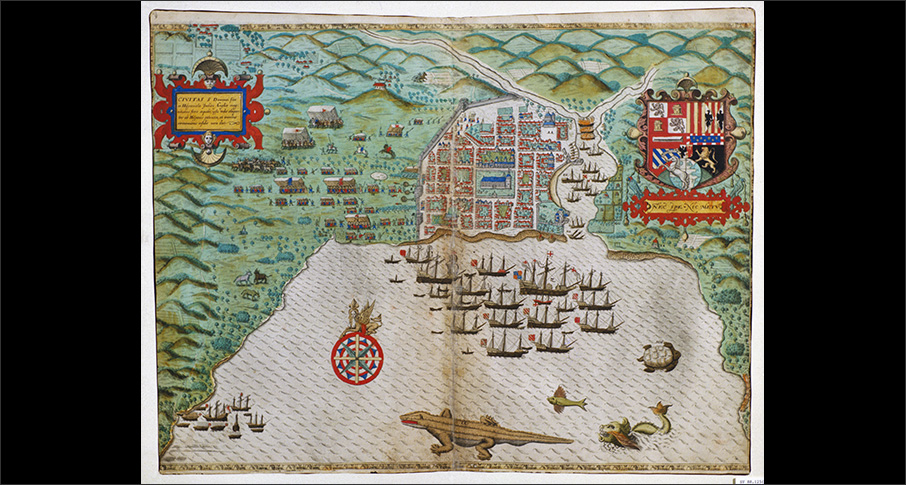 This image of a 1585 pirate attack on Santo Domingo was one of the first views of the Caribbean port seen in Europe. It shows the city, set where the Ozama River flows into the Caribbean Sea, held captive by a mass of English ships offshore. This scene highlights striking physical features of Santo Domingo: the fortress-like walls of the city, the straight streets and houses of wealthy residents, and, at the center of the city, the Cathedral—the first in the New World. From that cathedral the most famous English pirate of the 16th century, Sir Francis Drake, would hold the port ransom until the Spanish throne paid him for its release.

The publication of the picture, in a 1588 Latin edition celebrating Drake’s exploits, coincided with another English triumph, the defeat of the Spanish Armada. As with the published images of other Caribbean cities that Drake attacked—Cartegena (Colombia), San Agustín (Florida), and Santiago (Cuba)—this picture would have evoked not only “the Caribbean” but also would have told of the ceaseless competition for American wealth among European powers. It was the Caribbean where the Spanish treasure fleet, loaded with bullion from the mines, set sail. Today, the scene continues to show how European political rivalries found expression in visual culture.