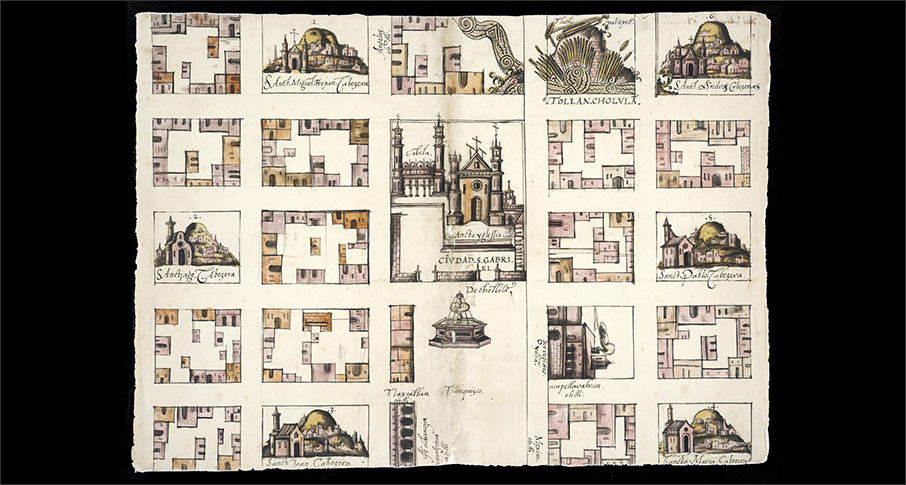 This small, delicate painting of the city of Cholula (in the present-day state of Puebla, Mexico) was created by an indigenous artist to accompany a Relación Geográfica, an account of the city commissioned by Phillip II, King of Spain. At the center of the city stands the large and imposing Franciscan church of San Gabriel. A large plaza, labeled as market place (tianquizco), fronts the church and at the center of the plaza stands a fountain. At the side of the plaza is an arcaded building where the native cabildo, or town government, met. Its architectural solidity is a measure of its importance.

After the Spanish Conquest, in both New Spain and other colonies, grids—a mode of Renaissance town planning—were the preferred format among administrators and missionaries responsible for laying out new towns and reorganizing older ones. Cholula was an ancient and important religious center in the pre-Hispanic period, and its physical reorganization reoriented centers of power. The Franciscan monastery displaced the enormous pyramid complex (identified on the top right of the map as “Tollan”) and the native town government fell under the control of a Spanish administrator (called a corregidor), whose house also appears on the central plaza.

Power relationships also shifted in other, more subtle ways. This map accompanied a description of the town written by its Spanish corregidor Gabriel de Rojas, in 1581. Together the map and textual description were sent to Spain. The politics of knowledge production signaled by this image, then, were both profoundly local and integral to trans-Atlantic imperial projects.

Mundy, Barbara E. 1996. The Mapping of New Spain: Indigenous Cartography and the Maps of the Relaciones Geográficas. Chicago: University of Chicago Press.