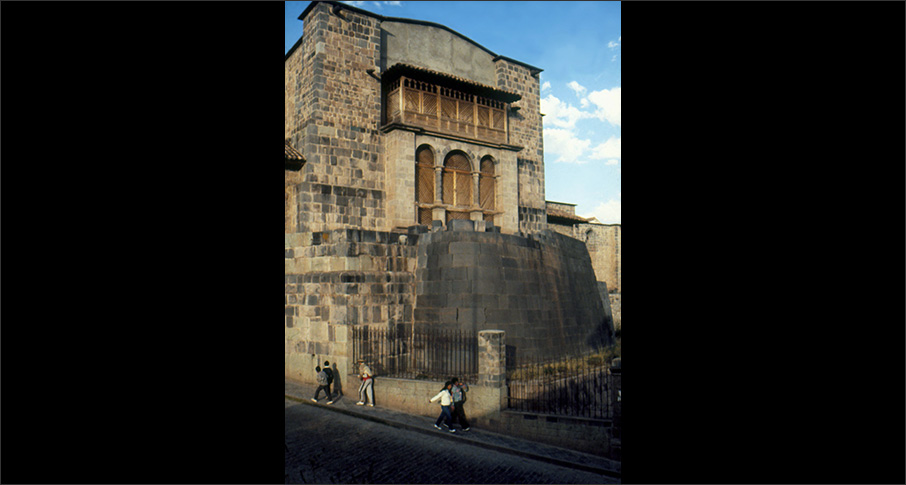 After the Spanish conquest of Cuzco, the imperial capital of the Inka, the Dominicans built a large and imposing church and monastery over the ransacked ruins of the most sacred temple in Cuzco, the Korikancha (the Golden Enclosure). This image shows how the friars built the apse wall of their church over the curving Inka stone wall beneath, using the pre-Hispanic masonry as support.

In pre-Hispanic times, the Korikancha housed holy relics and was a site of supreme historical and ritual importance to the Inka, being at once a religious and political building. After the conquest, the colonizers and the Catholic Church supplanted Inka rulers and state religion, and they partially razed the Korikancha. They preserved interior structures which now form part of the cloister, and used some walls as foundations for the Dominican church. For both the conquerors and the conquered in Perú, such architectural superimposition was a ready reminder of the new social and political hierarchy. In literal and metaphorical terms, the architecture of the Korikancha and Santo Domingo reveals the process by which Christianity took root in Spanish America: the Catholic Church was required to build upon local traditions and recognize that indigenous spirituality would not be easily obliterated. For even with the Spanish destruction of most of the Inka buildings, the site remained sacred to indigenous people who held dear their memories of the Inka past, even after conversion to Christianity.

Ironically, the smooth ashlar face of the lower Inka wall—a marvel of human engineering—seems untouched by time, while the colonial church above has been unsettled by earthquakes and eroded by weather over the centuries. Works such as this, which appropriate and reinterpret pre-conquest sites and concepts, made manifest the political force of visual culture in Spanish America.