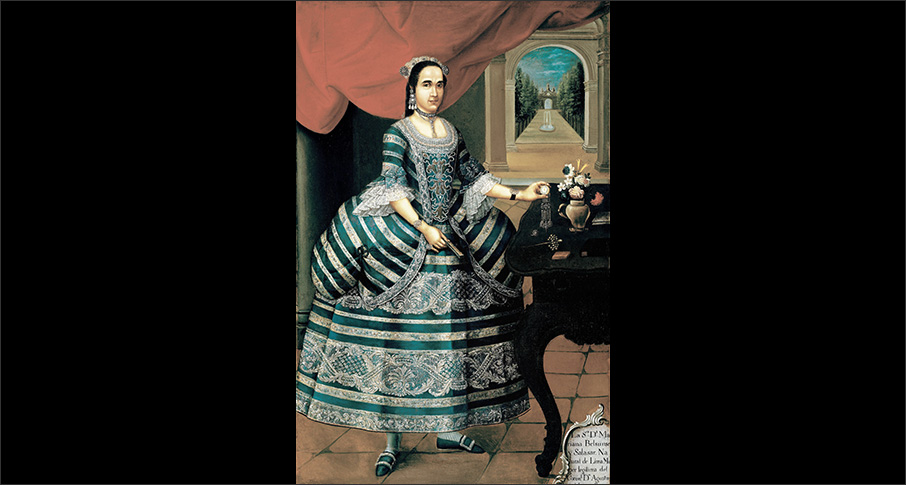 This portrait shows one of Lima’s Creole elite, Doña Mariana Belsunse y Salasar. The plaque in the lower right corner of the painting, typical of many colonial portraits, records her name and family connections. Doña Mariana, depicted almost life-size, stares directly out at the viewer, outfitted in a sumptuous blue silk gown. The cascades of lace and ballooning dress show the bounty of fine fabric used in the outfits of high-status women. In 18th-century Peru, much of this fabric would have been imported from Asia, New Spain, and Europe.

This portrait, like most from the 18th century, bears no artist’s signature. However, many painters, famed or unknown, took on such commissions because portraits could be a valuable source of income. Their compositions are rarely adventurous, and most artists, like the one who painted doña Mariana, followed standard conventions in choice of backgrounds, lighting, and pose.

Portraits like this one were most often commissioned by elite families. When hung in their homes, these images testified to ties between generations. They also served to remind family members of those taken away by marriage, religious vows, or death. Portraits of elite women often capture them at the defining moments of their social lives, as young brides or convent novitiates. For viewers today, such portraits often provide the only accessible glimpse of these women, before they slipped into unrecorded lives in the household or in the convent. Doña Mariana is an exception. She kept Lima’s gossips busy when she fled from an unwelcome marriage to a much older man, taking refuge in the convent. After he died, doña Mariana left the convent and rejoined the cosmopolitan city life of Lima.