Portrait of an Indian Lady 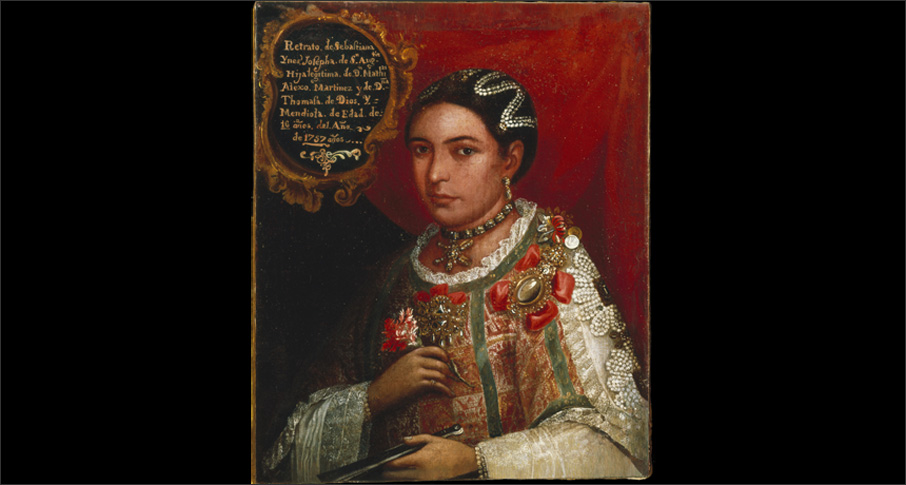 The young woman in this image was the daughter of a wealthy family, her status signaled by the very existence of her portrait, an expensive item in Spanish America. The inscribed text—a common feature in colonial portraits—identifies her as Sebastiana Ynés Josefa de San Agustín, the daughter of an indigenous cacique. While doña Sebastiana could at first be mistaken for a wealthy Creole, given her abundant lace and jewels, she also wears a woven huipil, the loose-fitting overdress of indigenous women. Her dark skin further marks her native descent. This portrait thus suggests how the signs of elite status were displayed not only upon the bodies of those of Spanish or European heritage, but also indigenous women.

The historical record shows that doña Sebastiana entered the convent of Corpus Christi in Mexico City, a convent dedicated to the daughters of the indigenous elite. While families often commissioned portraits of their daughters as they entered convents, this painting more closely follows the conventions of secular portraits of elite women. Instead of wearing the habit and crown of an entering novice, doña Sebastiana carries a carnation, a flower of brides (perhaps alluding to her future role as a Bride of Christ), and the fan of fashionable women.

While being Spanish or Creole offered a person considerable social and economic privilege in the 18th century, the indigenous elite proudly defended, even amplified, their distinct cultural patterns and privileges. Doña Sebastiana’s portrait is modeled upon that of an elite Spanish woman, yet her embroidered huipil reveals the overlap of different sign systems within a single representation as well as the patterns of everyday life.