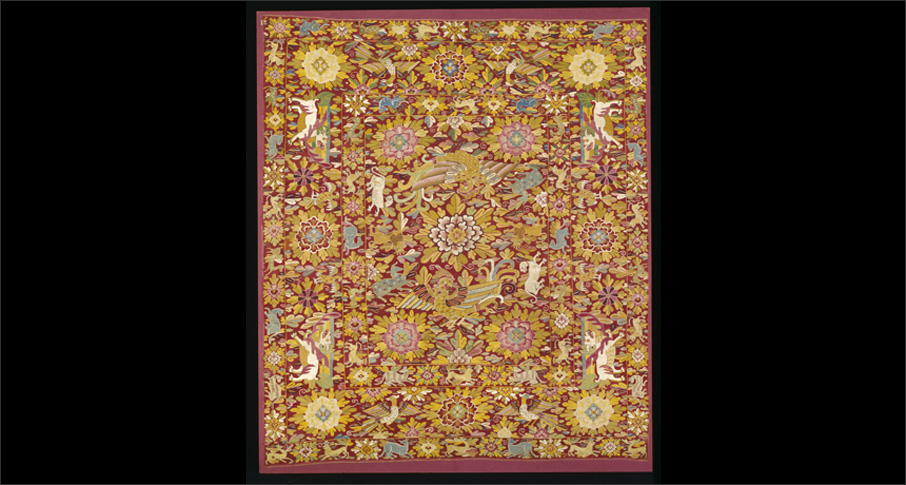 This cover for a table or a bed was woven in Perú , of cotton, linen, silk, and wool. Measuring over six feet on each side, it shows how complex techniques and visual images could fuse in luxury objects. For instance, the diversity of materials used here—especially silk and linen—speaks to the expense of the textile. The combination of materials also points to the extraordinary skills of weavers, some of them native Andeans, who would have had to manipulate threads of different densities, textures, and elasticity.

The patterns on this textile display the effects of trade networks that bound Perú to both Europe and Asia. The repeating peony flowers and mythical beasts of the design were inspired, at least in part, by Chinese textiles imported into the Viceroyalty of Perú in the 17th century. Yet the cover also displays crowned lions that derive from European imagery, and frolicking llamas unique to the Andes. Textiles like this were probably woven in an obraje, or under a master weaver, whose social class, as an artisan, was far beneath the patron for whom he worked.

Niles, Susan. 1992. “Artist and Empire in Inca and Colonial Textiles.” In To Weave for the Sun: Ancient Andean Textiles in the Museum of Fine Arts, Boston. Rebecca Stone-Miller, ed. Pp. 51-65. New York: Thames and Hudson.