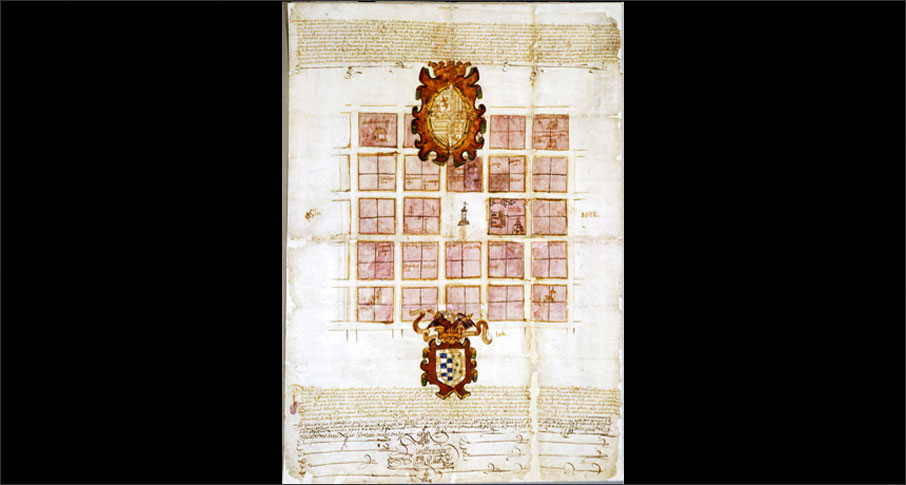 In the 16th century, the Spanish crown saw cities as the linchpin of colonization. It mandated their founding, prescribing a logical and predictable structure. Thus city plans—at least those crafted by Spanish hands—exhibit a consistent set of features: a grid-layout, with church and the main administrative buildings nearby. With the standard plan in hand, Spaniards made their indelible imprint on the vast and often hostile landscape of the New World. Some towns followed Spanish decree more closely than others, and sometimes the drawn plan owed more to desire than lived reality.

This plan, an ink drawing on paper, with some colors added, was made for the Spanish settlement of Mendoza, in the modern country of Argentina. Plans such as this one, with its grid and official seals hovering against blank paper, imply that the cities of Spanish America were to be laid out upon a “clean slate,” or virgin landscape. But such a thing rarely existed. Some Spanish centers were superimposed on indigenous cities, like Tenochtitlan and Cuzco, while others, like Lima, were settled on unimproved land, drawing on the labor from nearby indigenous towns. In the case of Mendoza, the region was previously settled by indigenous people, the Huarpes, whose population suffered greatly the introduction of European diseases. Thus the realities of civic design were far less utopian than these town plans suggest.