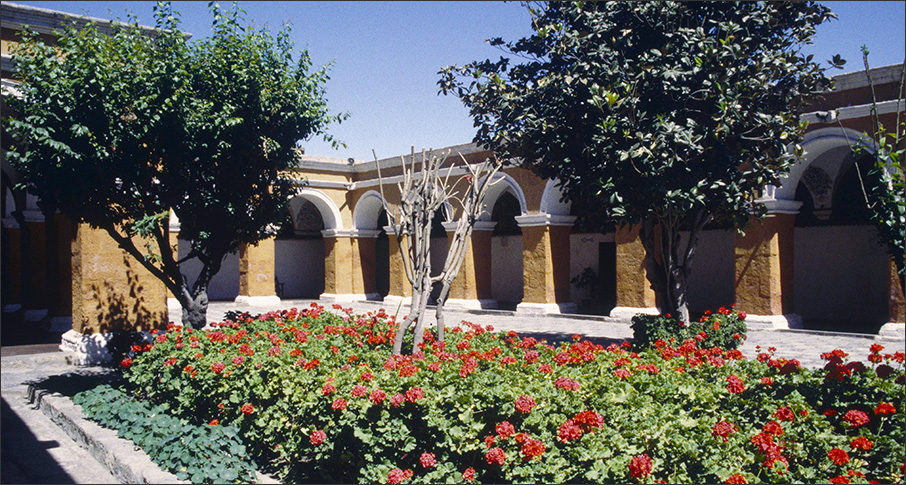 The nuns of Santa Catalina may have been cloistered behind convent walls, but the social and economic hierarchies of colonial Perú still shaped their lives. Founded in 1579 by a wealthy Spanish widow, the convent was dedicated to Saint Catherine of Siena, a Dominican saint. Within its walls, the racial and class distinctions of Arequipa were maintained, with Spanish and Creole women from wealthy families holding the highest offices of the convent’s administration, and living in elegant quarters, waited on by personal maids. Women without resources, or lacking pure blood, were often second-class citizens. And while women from poor families were technically welcome, most entered Santa Catalina as servants. The nuns thus spent their days in ways determined by their family wealth, no less than their religious aspirations.

This cloister is one of three at Santa Catalina and dates from relatively late in the colonial period. The history of the convent’s physical form is one of change rather than stasis. Earthquakes have shaken the walls of Santa Catalina many times since its founding. And with each rebuilding, the physical form of the convent shifted. In one reconstruction, the common sleeping room for nuns was abandoned in favor of individual rooms. In another, early in the 18th century, this large cloister was created. It is not hard to imagine nuns walking along its shaded arcade, the enclosed garden being a metaphor not only for the Virgin Mary herself, but their own lives as well. But to achieve these forms, the nuns of Santa Catalina depended on laborers, likely native Andeans pressed into service, to build the cloister. These men also form part of Santa Catalina’s history. This convent, like so many others in Spanish America, was thus never far removed from the urban economies of the colonial city.