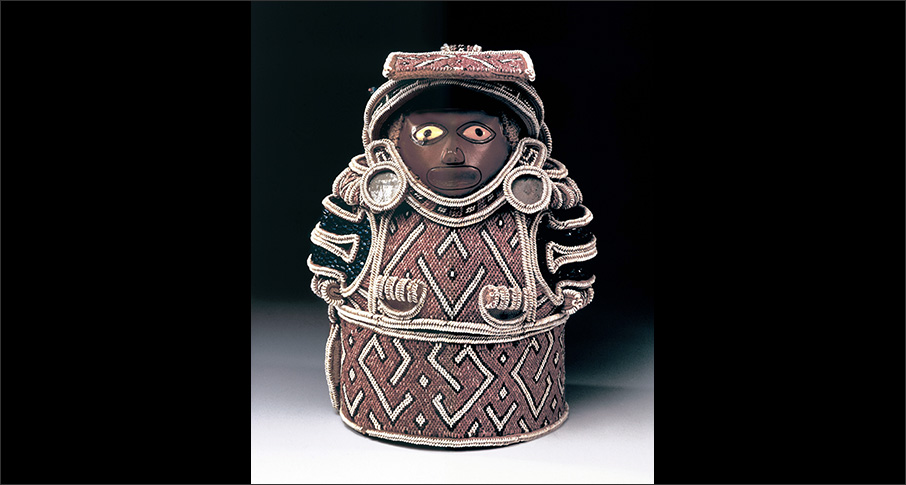 This zemi was created shortly after Europeans arrived in Hispaniola. One of a few surviving Taíno beaded objects, zemis were common in the pre-Hispanic period. Beginning with Columbus, European chroniclers described them, reporting that they acted as oracles, reliquaries, and embodiments of ancestral spirits. This particular figure is Janus-faced, with this side depicting a human face, the other representing a skull or a bat. Both sides of the entire body are elegantly decorated with shell beads set in interlocking patterns; the bottom piece of the zemi is detachable, and may have once been worn as a belt.

Through its material form, a mix of local and imported materials, this zemi suggests how the Taíno responded to the introduction of foreign materials as they, too, became part of an increasingly “international” world in the late 15th century. The specific meanings that the zemi’s mix of materials had to its Taíno maker and patron are unknown today. However, objects with parallel combinations of indigenous, African, and European materials would recur frequently throughout the colonial period and their meanings shifted across time and among different audiences. We do know that sometime after this was made, it left its Taíno ambit, and once in a European collection, signs of its cross-cultural heritage, evident in the materials of disparate origin, were eclipsed by European conceptions of the exotic that transformed this zemi from an ancestral figure into a cultural curiosity.

Ostapkowicz, Joanna and Lee Newsom. 2012. ” ‘Gods…Adorned with the Embroiderer’s Needle’: The Materials, Making and Meaning of a Taíno Cotton Reliquary.” Latin American Antiquity 23 (3): 300-326.