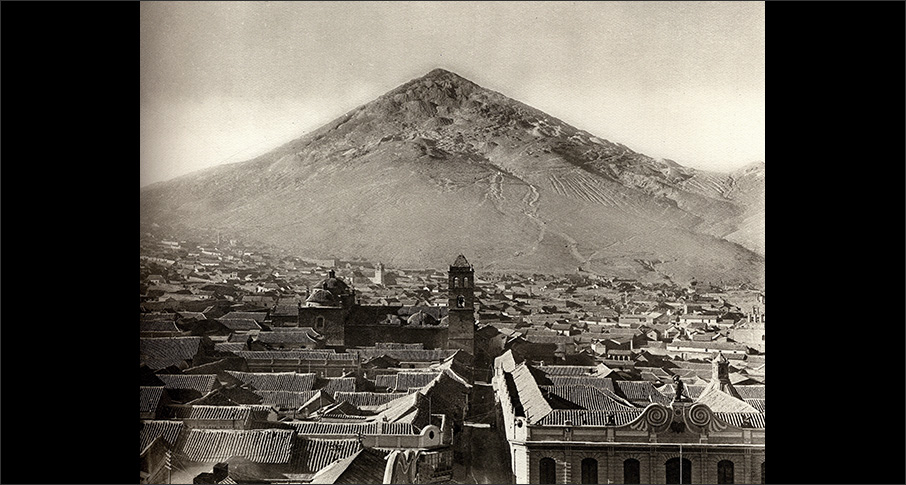 This photograph of 1928 highlights the mountain that looms over the town, Cerro Rico (Rich Hill). It was here that millions of kilos of silver were mined, minted and then sent to the Atlantic and Pacific coasts to be traded throughout the early modern world. By the early 1600s, Potosí had become one of the largest cities in Spanish America (and the world). The city grew to serve the mines. The refining of silver took place along its streets and a Royal Mint (Casa de Moneda) turned silver ingot into coin. The central part of the city was ordered by a traza, or grid plan with a central plaza, which, at the city’s height, was one of the busiest civic centers in the Americas.

The silver mines active here in colonial times were worked by indigenous laborers and, to a lesser extent, African and African American men. Given Potosí’s wealth and ceaseless demands for labor, it is not surprising that it was one of the most multi-ethnic cities in the Americas. However, many of its residents were forced, rather than chose, to be in this polyglot city. To make the mines run, mit’a labor was marched in from the surrounding regions; African slaves came from across the Atlantic. In the sprawling neighborhoods around the mines, some Andean workers lived close to others from their birthplaces; others lived among blacks and poor Creoles, forging new social arrangements. While the main plaza of Potosí may have been a product of Spanish town-planning, its day-to-day vitality was fueled by its diverse population and the new social practices they forged in this boom town.

Roberto Gertsmann was an Austiran engineer and photographer who traveled across Bolivia in the late 1920s. His images depict miners at work in Potosí, indigenous residents of Bolivia and landscape views of the country. By the 1920s, when this photograph was taken, Potosí was dependent upon tin drawn up from the mines of the mountain, not silver. Nevertheless his image underscores the lasting impact of the silver-rich mountain on Potosí’s reputation, one inextricably bound to its mineral wealth.