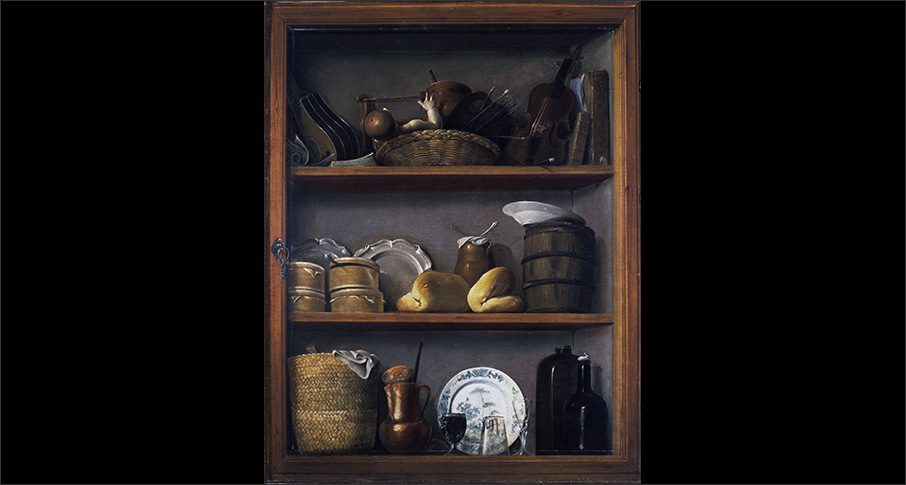 This is one of the earliest still life paintings known from Spanish America. Its artist, Antonio Pérez de Aguilar, employed a technique called trompe l’oeil, or “trick of the eye.” By painting three-dimensional objects in a very shallow space, he was attempting to trick the viewer into believing, at least momentarily, that the painting displayed things of the actual world. The three cabinet shelves have been filled with musical instruments, toys, food and tableware. As was typical of the genre, this painting’s seemingly random assortment of objects was meant to be read as an allegory.

The bottom two shelves hold objects and substances of the material, bodily world: blue-and-white porcelain and silver plates for food; wooden boxes for cajeta, a caramel made of goat’s milk; a copper pot for chocolate, a favored beverage in New Spain, often drunk from painted gourd bowls like the one at the top of the scene. In contrast, the objects on the top shelves relate to the intellect and creative actions: a violin at right, a lute or guitar at left, bound books throughout. The painter has included his own tools of the trade, as if to elevate his status from craftsman to inventor, as had happened in Europe centuries before. Visible at center is a palette and paintbrushes. The doll-like figure in the basket is not a child’s toy, but a statuette of the Infant Christ, perhaps in need of repair. The hole on the head would have once held a silver halo. A unity is achieved along the painting’s central axis where the painter has placed objects related to Christian worship (the bread and wine of the Eucharist, the figure of the Infant Jesus) to suggest how residents of New Spain ultimately saw these worlds as inseparable.

The painting also reveals how New Spain stood at the crossroads of international commodity trade routes. While the silver to make the dish was likely mined in New Spain, the blue-and-white plate was imported porcelain, and the clear glasses also likely came from abroad. Chocolate, like silver, was a valued export product.

As was common at the time, the painting was made with oil paint applied to canvas. It measures ca. 49 x 38.5 inches (ca. 125 x 98 cm), and in the 1780s it was given to the Academy of San Carlos—the first art academy in Spanish America, and one of the most prestigious: a mark of how highly it was regarded. It remains in Mexico’s national collection.