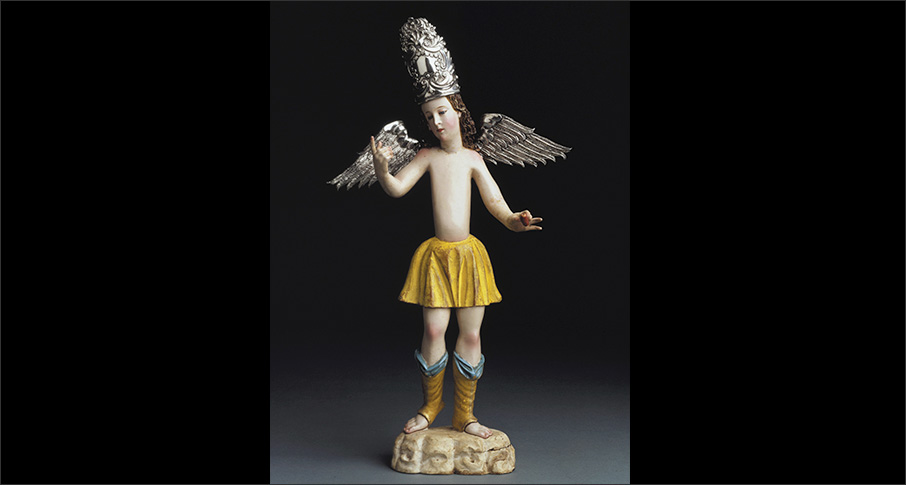 Created in Quito (Ecuador), this statue represents the patron saint of the city, the Archangel Gabriel. Since the 16th century, workshops in Quito had been turning out great numbers of statues for church altarpieces, portable altars, and shrines for the homes of wealthy families; Quiteño sculpture was exported throughout the viceroyalty. In the late 18th century, when this image was made, smaller religious images had become very popular. Like this one, many were carved of wood, covered in gesso and painted. The fancy silver wings and crown attached to the statue were probably made by silversmiths. The graceful hands, rosy cheeks, and the S-curve pose of this sculpture all reflect Quiteño tastes of the time. Such features were inspired by Rococo-style engravings and painted ceramic figurines imported from France and other places in Europe.

Originally, this saint would not have stood alone; most likely he formed part of an ensemble of archangels. He also would have been dressed with clothes made of expensive embroidered fabric or hammered sheets of silver. While angels such as this one were familiar objects in churches, during colonial festivals people also dressed up as angels and paraded through the streets or performed in religious dramas and plays. Thus, this sculpture of the Archangel Gabriel was but one of the many representatives of the “otherworlds” that Christians created and encountered in the cities of colonial Spanish America.