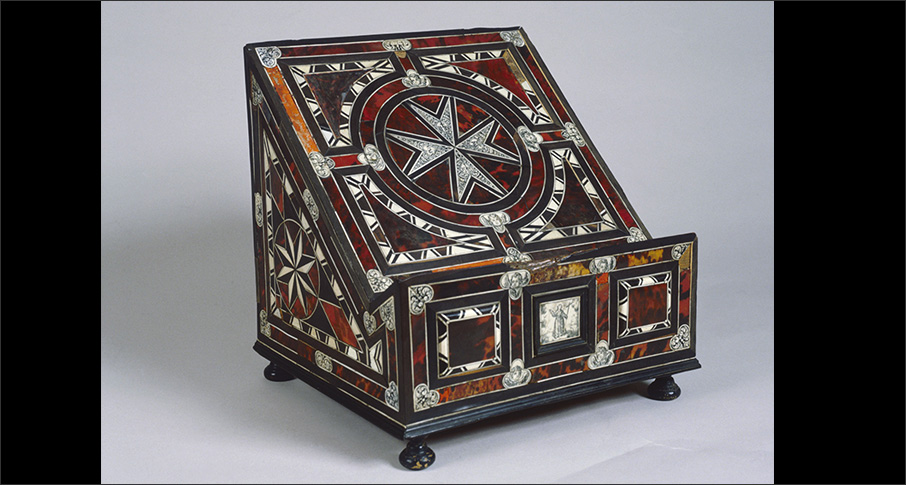 This elaborate stand, originally intended to hold a prayer book, displays the high degree of craftsmanship invested in objects that played a role in Catholic worship but were not themselves holy or sacred. The black and white star that figures prominently in the side cartouche is the symbol of the Dominican order, and this piece could have been commissioned for a Dominican church or monastery. The materials of this missal stand include bone, tortoiseshell, ebony and silver; the exquisite workmanship of the inlay suggests the piece was made in one of the many workshops in Puebla de los Angeles, a city in New Spain famed for its works of wood inlay, or marquetry. Its craftsman could obtain all of the materials used in the missal either locally (wood, bone) or in the large markets that thrived in Puebla and other Spanish American cities.

The bold geometric patterning—with the dark browns of the tortoiseshell and blacks of the ebony set off against the white of the bone—may have drawn indirectly from Islamic woodworking, which inspired both Spanish and Spanish American craftsmen. And furniture inlaid with inscribed bone, which may have originated in Italy, was popular across Europe. Objects such as this make it clear that aesthetic taste, no less than desires for luxury items, extended across the Atlantic to New Spain. And while the craftsman (or craftsmen, since so many materials are involved) often could not afford to own Italian bone-inlay or Islamic fretwork themselves, their patrons may have shown them examples to offer both aesthetic inspirations and technical models.