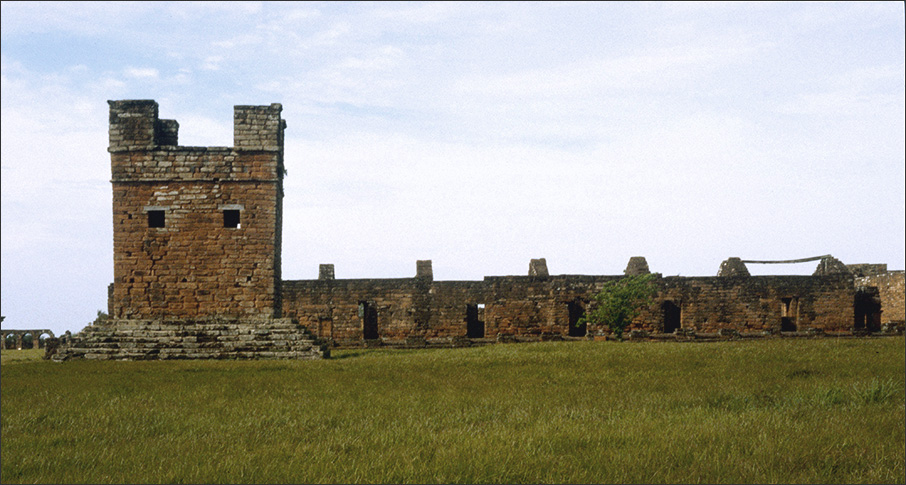 Founded by the Jesuits, La Santísima Trinidad was one of the 30 mission complexes built in the region of El Paraguay to house native peoples, among them the Guaraní. Extending across eight hectares (about 20 acres), it was among the most expensive and labor-intensive architectural projects in the region. Missions like this one, of course, had been founded by different religious orders in Spanish America since the 16th century and often were utopian projects designed to create ideal Christian communities. In their accounts of their Paraguay missions, the Jesuits underscored their utopian nature—and indeed, Jesuit missions were often a haven for native peoples threatened by slaving raids led from the Atlantic coast. The mission church was never finished, and was in ruins by the end of the 18th century, sometime after the Jesuits were expelled from the New World.

The ruins seen in this photograph suggest how both Jesuit and Guaraní aspirations for a utopian, self-sufficient community took form. First the buildings were carefully planned to emphasize communal life. Visible here are the remains of buildings that scholars believe served as homes for the Guaraní (there were ten such structures). Second, their construction necessitated a high degree of participation—whether voluntary or forced is not clear—because the worked sandstone and brick vaulting of the church required more labor than the wood or adobe typically used in Paraguay. Thirdly, religious worship was central: the largest building in the complex was the single-nave church. Less visible in the ruined remains are the patterns and practices of everyday life, colored by both Jesuit and Guaraní habits and expectations.

Bailey, Gauvin. 1999. Art on the Jesuit Missions in Asia and Latin America, 1542-1773. Toronto, Buffalo and London: University of Toronto Press.