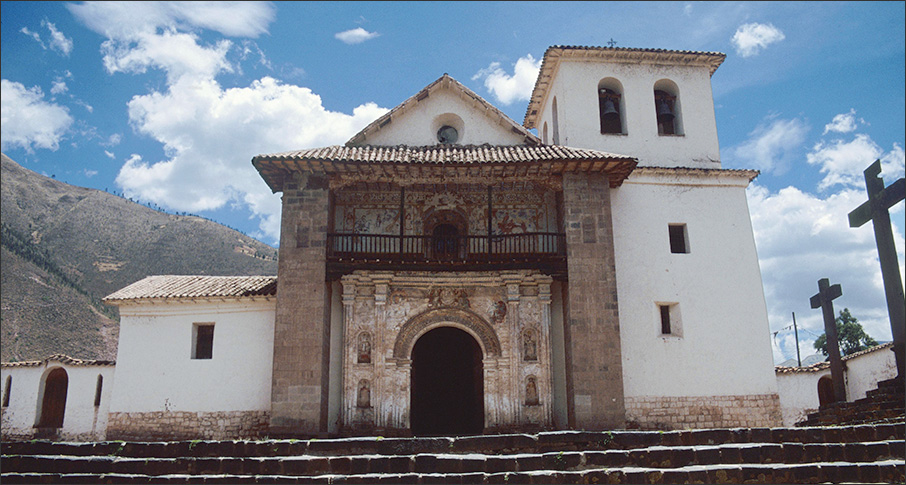 This church, San Pedro Apóstol, in the provincial town of Andahuaylillas, outside of Cuzco, was built for Jesuits evangelizing the region. While other orders were at the forefront of evangelization in New Spain, the Jesuits played leading role in Peru and Brazil. Like other orders, the Jesuits saw the importance of buildings, and the rituals that were carried out within, as a way of introducing and building the Catholic faith.

While pre-Hispanic Inka buildings signaled their importance through the use of exquisite (and time consuming) mortar-less masonry, the Jesuits adopted quicker building methods. And their church was originally painted, both inside and out, directly on the plaster walls. Its vivid imagery—the walls of the nave were lined with figures of female martyrs—proclaimed Catholic ideas both to the community of Andahuaylillas and to the many travelers that passed through the town on route to the great mining center of Potosí.

This simple church stands in sharp contrast to the nearby urban jewel built by the Jesuits, La Compañia, which was far larger and more richly decorated both inside and out. This comparison reveals the range of building projects, most of them depending on local labor and craftsmanship, sponsored by the Jesuits in the name of Catholicism in Spanish America.

Bailey, Gauvin. 1999. Art on the Jesuit Missions in Asia and Latin America, 1542-1773. Toronto, Buffalo and London: University of Toronto Press.